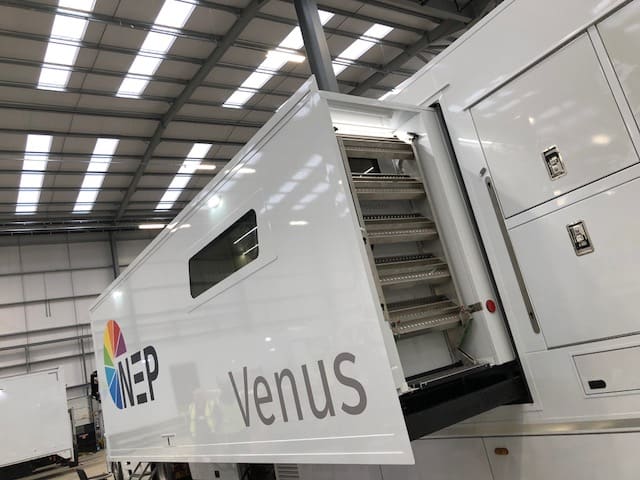 This article was written by SVG Europe. Read the original here.

Venus and Ceres, NEP UK’s latest outside broadcast vehicles and its first to be SMPTE ST 2110-compliant, are claimed to form the core of what will be the world’s biggest IP-based broadcast system for an upcoming sports event. The vehicles will be used at major events, sports fixtures and other large scale productions, and their abilities can be expanded considerably by the addition of a huge, modular flypack.

“Basically, everything is available everywhere when we connect them together. We trunk it together with a bunch of fibres,” which is how it will be used for “a major sporting event in the summer” (June/July) “where we end up with a total of about 21 galleries hanging off of the one IP core, which makes it the biggest IP system ever made,” claims Rob Newton, engineering and technical director, NEP UK. The galleries will be within about 300m of each other, but “we could, of course, extend it to be further than that.

“This is the first time we’ve been able to effectively make our trucks larger – the only limit is the number of ports available on the switch,” adds Newton. “We can put the truck in any location and connect multiple IP systems, be they our flypacks, our trucks or our media hubs, creating a fully scalable and large broadcast system – the kind that you would only previously find in a fixed studio set up.”

The summer event will involve the two trucks and the new flypack system, and will give the installation a totally redundant core, “which nobody has done before.” Indeed, he says that is one of the key differentiators between Venus and Ceres and similar IP trucks, in that “they have a level of redundancy in the IP core, not just relying on the switch’s redundancy. We effectively have complete redundancy on some of the signal flows.”

While the bragging rights as to who exactly has the first SMPTE 2110 OB have to be shared – as Newton acknowledges, the upgraded versions of Timeline’s UHD trucks are also now ST 2110 compliant – and as to whether Venus and Ceres are the very first OB vehicles to be built fully ST 2110 compliant from the start, that might have to be shared with NEP in the US, which has built its new EN3 for ESPN around a SMPTE ST 2110 IP routing core, although much of EN3’s equipment is different from Venus and Ceres and there was no co-ordination between the two arms of NEP.

Newton believes that in the design of its new IP OBs, NEP UK has created a “new industry benchmark for OB platform topology”, as its Arista switches provide enough data throughput and data linking capacity to realise NEP’s ‘single virtual truck concept’, and this is where the real power lies. In this respect, “our flypack system is probably more important than our trucks, as far as we’re concerned.”

Unlike some UHD IP-based trucks, which use TICO compression, NEP UK’s new systems are totally uncompressed. The two vehicles replace its old HD1 and HD4 trucks, which were used for general purpose work, and allowed them to introduce “our first future-resistant IP capable trucks”.

Central to this are Arista’s 7504 virtualized network datacentre IP switches. These have “three line cards, so it’s basically designed in such a way that we can connect it to other external switches,” he explained. “Mainly in our flypack or between the trucks, which enables us to go up to effectively something like 8,000 squared,” in the single virtual truck.

Within the flypack it has a pair of 7508 switches, for redundancy, and “every signal hits both switches, every destination is fed from both switches, so if one complete side of it fails, it carries on.”

The ST 2110 system infrastructure is identical in both vehicles. Each system is built around Grass Valley (formerly SAM) IQ UCP 25GbE Gateway cards, which provide two-way links between the new IP-based equipment and any existing baseband technology using SDI feeds.

“The reason we picked that particular gateway card is, unlike the ones that our competitors have used, which is the IQ Mix cards, ours are repurposable. We can use them as a gateway card now, but when more and more IP kit comes on line, we can repurpose them into multiviewers or NATs [Network Address Translators] or any other use they can load the software for,” explains Newton.

It has bought 350 of the gateway cards, all with 16 ports. All of its 34 multiviewers (each with 48 inputs) and eight vision mixer frames are IP-fed as well.

The cards are 25Gbps, and with UHD and HDR in mind, this means that smaller switches are required, “even though they are massive switches, they would need to be even bigger if we did everything in 10gig.” They can get up to ten 3G signals from a 25Gbps port, or two uncompressed UHD signals. “We didn’t want to go down the compressed route because, why? If we don’t have to there’s no point,” he adds.

“We have a level of HDR monitoring, but not everywhere. Certain waveform monitoring is HDR, and the SAM mixers can cope with HDR. We can fit two mixer frames into each truck, so we can do dual level switching. In fact, on a job we are just about to do we have three mixer frames in one truck.” This is primarily for their own ease of use, as the truck is coming off one job where the production team used a Kayenne, whereas the next job needed two Kahunas: “The third one is not being used, but there is no reason it couldn’t be.”

“Because we’ve built it in such a way that it’s scalable, we can just connect more remote boxes, and there is enough capacity within the switch to let us scale it up.”

The two trucks have slightly different layouts (one has a larger production area and one has a separate edit area) for different applications. Both can be fitted with temporary walls to further customise them for specific customers.

The Kahuna is preferred by most European customers, while US-based productions typically ask for the Kayenne.

The Telex talkback is mainly IP, but with analogue integration, and was chosen to retain compatibility with the rest of its OB fleet. “Connectivity is easy between our trucks with it. Even our older trucks would be able to interconnect to it.”

There are three Phabrix Qx 12G signal generation, analysis and monitoring systems in each truck, to cope with SDI and IP feeds. NEP also invested in four Rx2000 units, with each Rx providing up to four channels of 2K/3G/HD/SD-SDI video/audio analysis and monitoring (dual inputs per analyser). It chose Phabrix because, “we looked at their competitors, and they seemed to have the best road map of what they were doing, especially within the time frame.”

The Axon Cerebrum is something they haven’t had to deal with before. “In the past we’ve never really gone down the route of a separate control system, but these systems, particularly when it is all put together, are so big and unwieldy that there is no other way of dealing with it.” It looked at rival systems to Cerebrum, but “on ease of learning there is no comparison, we think. The Cerebrum is much easier to get your head round.”

All the new equipment requires greater cooling; the truck has to provide increased air conditioning and, indeed, all equipment can be cooled separately in the various operational areas.

Another major differentiator for these systems is the significant reduction in cabling, as it requires far less fibre optic cable compared to all the coaxial cable previously required. This is quicker to integrate and much lighter.

“We did a job recently, where we outboarded all of our EVSs [16] from the truck to part of a building and, basically, we ran in two cables 200m from the truck and it just all worked. We just outboarded a couple of our flypack frames.”

Using the 100Gbps connections, which can each carry some 80 1080i signals, allows it reduce its cabling needs significantly. “In the past that would have been 160 video cables, and also where you would be limited to maybe 30m, or 100m maximum if you have decent cable, now we can go kilometres away if we need to, using single-mode SFPs.”

Part of the reason for using the flypacks is to distribute feeds to multiple broadcasters, with remote boxes spread over a wide area. “Where, in the past, this would have involved a whole lot of cable, we are just running a few fibres,” he says.

Each truck is wired for 28 cameras (taken from NEP UK’s existing Sony stock), but with the flypack system it has bespoke bays that have enough interface cards to take 14 base stations, and can just add a couple of these bays if needed to double its camera inputs.

It has one large flypack, which will break down into four systems (there are four control systems, vision mixer frames, etc). Everything is modular, and it has built (and is still building) a large number of bays, for example some with five EVS systems. “You just take whatever bays you need, connect them together, and it should work.” As they aren’t all finished yet, he hasn’t seen them all working together, but he is sure they will work well, connecting together using MTP multi-mode cable or MTP breakouts, depending on how many connections they require.

The system could easily be double the size it is as the frames are only half full, which would support 30 galleries or more, and 100 cameras, without any issue – although, he says, “I can’t imagine anyone using that much in one place.” It does, however, make it very easy to scale from HD to UHD.

Venus completed its first job on a week-long event in April without any issues, and Newton has seen no problems at all with the system. Although the trucks can output IP for contribution, its usage so far has required it to revert to baseband when it leaves the truck, and he thinks it will take some time before customers will want to have IP leaving the truck. “We will provide whatever is wanted,” he notes.

The ST 2110 standards suite specifies the carriage, synchronisation and description of streams over IP for real-time production, playout, and other professional media applications, and has largely been ratified, with just a few features to complete.

“We’ve managed to implement it quite simply, without any issues. There are some holes in it still, like Dolby, as in the metadata type, but that will be sorted. It is not completely ratified yet and that will help. They are minor issues and as soon as they are all officially ratified it will all work. It has been a lot easier than I thought it would be,” he says. However, it helps greatly that most of its equipment has been from one manufacturer.

This article was originally published by SVG Europe on 10 May 2018.